But the dynamic between these companies looked very different at different stages in their histories. Initially, both Blockbuster and Netflix rented DVD's.  Blockbuster had the initial, first mover advantage and at its peak consisted of a network of over 9,000 stores.  To compete, Netflix made no investment in physical stores, instead using the post office to deliver its disks in its iconic red envelopes. 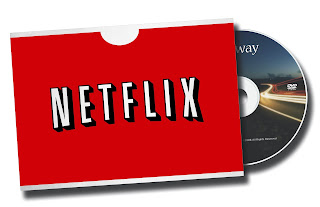 As it turned out, the convenience of ordering discs on the Internet and receiving them in the mail plus the terms of the rental (which did not include late fees) may have been enough to drive this dynamic. According to Wikipedia, in September of 2013 Netflix had over 40 Million streaming subscribers while at it peak in 2007 Blockbuster had only 3 million customers.

But Netflix also had the classic "eTailer" advantage:  in addition to its 9,000 stores, Blockbuster had over 60,000 employees at its peak while even now Netflix has just over 2,000.

Netflix, however, did not rest on their many advantages but pressed them instead, introducing a streaming service over the Internet in 2007.   In 2010 Netflix dropped from the fastest growing customer of the US Postal Service to the largest consumer of Internet bandwidth in a single year.

It's hard to measure market capitalization because in 1994 Blockbuster was acquired by Viacom for $8.4 Billion.  But we do know that Netflix was worth over $19 Billion in November of 2013 and in 2000 Blockbuster declined to acquire Netflix for only $50 Million.

So it may be that shareholders as a class have done fine:  there is substantially more shareholder value created than was destroyed in the competition.  Similarly, Netflix seems to be serving all the consumers lost to Bockbuster and then some.  This is precisely what Schumpeter meant by "creative destruction":  disruptive change must destroy wealth in the creative process.

I'm not able to do the research to figure this out but some day someone should look at the entire value chain to see just what impact the Internet has had on this part of the economy.  Both companies in fact rested on several other entities which have also been disrupted by this transition.  Presumably, based on bandwidth utilization, we could figure out how many jobs have been created at Internet Service Providers (ISPs) and technology suppliers like Cisco Systems, my employer.  But to net it all out, we should probably also try to determine how much revenue and how many jobs were lost at media companies and the US Postal Service.  Manufacturing and shipping bits is just fundamentally cheaper than atoms.  And maybe, in this case, almost as good.

But I'm afraid that most of those 60,000 jobs are gone for good.  What ARE people going to do, anyway?


I'm also curious about the retail experience, however.  On the one hand, consumers save time, effort and money getting back and forth from their homes to the Blockbuster store.  But on the other hand, can we value the social interaction that occurs in the neighborhood shops, malls and downtown streets, created by the local video store?  It's hard to say.

What do you all think?
Posted by stefanoq at 7:49 PM